As an artist emerging from Edinburgh College of Art I had hoped there would be a plethora of contacts and opportunities I would be able to take advantage of, as I had seen in previous years. The current situation has undermined all I had ever wanted to gain from my studies and graduation. There are thousands of art students graduating this year without a degree show, without the public exposure that would act as the first step into the art world. Some support has been offered by the various universities but nothing will compare.

I had dreamt of my degree show for years. In the weeks just before lockdown I was psyching myself up for the final push; the hours of hard labour, the sweat, blood, and tears. The staying in the studio until they chucked you out. The eating pot noodles and endless cups of coffee. The challenges of construction, presentation, and safety. The pure joy I would find in the creation of my vision. The art, always the art.

We have all been separated from our passions. This would have been a time to thrive but now it is a time for mourning. I walked past my university campus a couple of weeks into lockdown and found myself crying. The community has been fractured, the art has been locked away, and working from home is unreasonable. I am in limbo.

As a sculptor I cannot create right now, I can only imagine. Drawing is one way of imagining and became more integral to my practice. They already drove my decision making in terms of layout and scale.

In this situation, knowing there was no way to have closure, all I could do was reassure myself that it would have worked. I turned to model making and frantic scrabbling for materials in order to create this vision in miniature. The result was more of an approximation as it was only after its creation that I produced a full layout and plan for the work. The images, however, form a translation of the experience I was aiming to produce. It would have been a full experience and emersion in the installation, with the visitors activating the space; the ripples of water gently eroding the blocks over time.

Although this work has not had the exposure from the degree show it has found other ways to be disseminated. The work Built on Soil, 2020 has been featured in the a-n Degree Show Guide 2020 with a full page spread and other works have been displayed on Instagram platforms such as @sadgrads2020 and @quarantinedreams2020, with more to come. Today is the launch of the Edinburgh College of Art Graduate Show, which showcases my work and the amazing work of my peers. So please click here and go have a browse.

Islands of information, these porcelain slip casts of paper form strange textured icebergs. The fragments were once one but due to the fragility of the material they broke apart and in arranging them an archipelago was created. As an experimental work Archipelago is an adapting and changing installation.

There are times when, as an artist, you feel like you just make things for the sake of it. This is mostly true but occasionally something happens and a piece of art just appears. This particular project started with a piece of my Christmas cactus being accidentally broken off. Me being me, I picked it up and decided to pot it in the hopes it would grow. However, without any fresh soil or a pot I cut up a milk carton and filled it with soil just dug up from a verge in the garden. This seemed to do the job and it began growing but so did all the seeds and things that were already in the soil.

Feeling kind of happy at the prospect of mysterious plants I decided not to weed it and let them grow and boy did they grow. I now have a very green window box fashioned from an old milk carton. With the thought of this unexpected life I went to work on the Isle of Mull, taking one of my casts with me. On arrival I started an experiment where I filled the cast with soil from the surrounding area. Watering it and caring for it as though there were seeds in it produced a beautiful effect. Everyday I wrote a short entry of my observations and everyday there was something new.

Life is all around us from the undisturbed seeds of plants long forgotten to a billion bacteria living in a teaspoon of soil. There is a lot more to the world than we sometimes expect and if we stop for a moment to watch it, to see it growing and changing we might see something beautiful.

”The little forest seems to both grow slowly and quickly as the weeks go by. The vast variety astounds me. The whole cast has become a tangle of fine new greenness. A miniature forest of life in a landscape of information. When I get up close it is easy to get lost in its intricacies and imagine walking among them like an ant.”

This Hospitalfield micro-residency, organised by the university, gave me the opportunity to experiment with my ‘Linescape’ work and how it conveys, translates and embodies information. My fascination being in the detailed possibilities produced by line. A line can represent many things, sounds, words, music, pulses, waves, tremors, vibrations etc. and in such a simple way. I set out to create an ambiguous line that could be seen as any number of formations. Placed opposite a statue of a sailor holding a telescope signifies  land. The setting of this extravagant Victorian house brings contrasting themes into play; the modern neon red of the light alluding to cheap consumerism of the city and an unsustainable life. 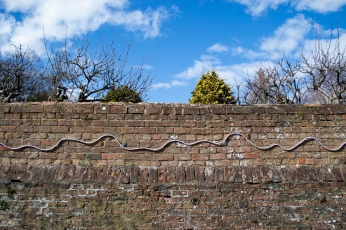 I introduced a second light, which was thin, blue and around the base of the statue, linking the statue to the line opposite. ‘View to a Lightscape’ changed all the way from the strong light of day through to the murky dark of night; different qualities highlighted throughout. 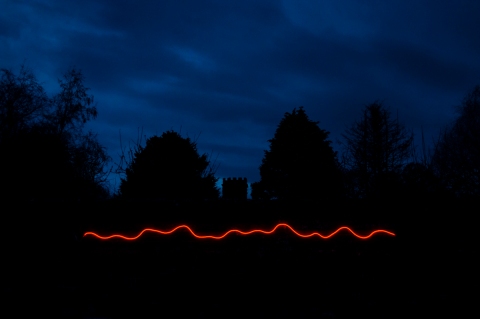 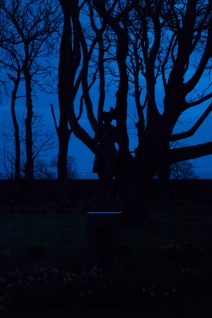 Sometimes its the spontaneous things we do that reignite our fascination and passion for what we do. For so long I have distanced myself from my work. The paper cast series consists of paper crushed by others and rarely by my own hand. One afternoon I found an old broken heavy-duty power cable, which I hung up to experiment with. This exploration of the object took off and I was engulfed by an urge to play, move and become a part of it. These moments of pure innocent play are hard to come by, as I have found myself increasingly restricted by my own organisation and structures. 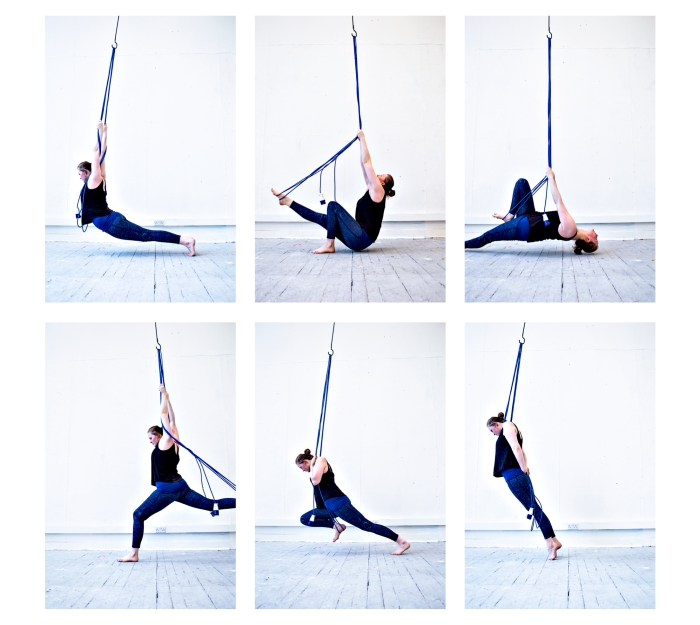 The Artist. A person of play, a conversationalist. In meeting this object, this other, a connection is made. One body of lines meets another; the artist steps into motion. The tension is high at first, as one battles the other for balance. Cable tight in resistance to motions it was never made to bare. Lines, Lines, Lines.

Now the two are intertwined; one becomes the other in a drawing of forces with gravity as its canvas. The subject becomes lost in the object’s movements. No longer is the Artist the maker of art and no longer is the cable an object to simply use. Lines, Lines, Lines.

This non-object was once devised to carry and connect energy, but now it has become nothing but energy. What is it now? ‘It’ being two that became one. This production staged by Play, undoes them both. They are lost. Lines, Lines, Lines.

Nothing there but lines, motion, ties. Gravity bending them to its will. The Artist drawn in by fascination, loses control in an eagerness to explore the endless limits of a new play mate; neither of them were made for this. Lines, Lines, Lines.

The balance between them swings backwards and forwards in an attempt to coalesce in something actual, something that can be named. But a name to this would be awkward; a third wheel, never quite resonating with its essence. So, it stands unknown. It moves unknown, fluctuates, molds and forms unknown. And yet it knows one other. Lines, lines, lines.

Energy flows equally through it as one, the moment overtaking it. Primal is its urge to be, that drives it into life from the living and the dead; the natural and the not. Again. it paints, draws, sculpts. Yet another line, line, line. Before the chaos of the moment spins, pulls, stretches out the two of them. Their time together drawing to a close. The body and the object. The Lines, Lines, Lines.

A new solo exhibition of works concerning line, edge and translation featuring the previous work ‘Set in stone?’. Combining sound works, writing, drawing and both kinetic and still sculpture, ‘LINE.EDGE.TRANSLATION’ aims to fully submerse the audience in an experience of the senses. Lines are everywhere; through words, images, objects, sound waves, thoughts, vibrations etc and this is a celebration of that.

Sat in a room full of lines,

Listen to them move, to them grind,

Watch as they form in the space,

Imagine their shape, their pace,

In the centre of the room sits ‘Material Information’ an interactive work that invites the audience to turn the bent wire forming a live animation in a shadow on the wall behind. To the left hangs two drawings in light and cable translated from original drawings done in a performance lecture. The original drawings where performed by peers who where told to draw a line that took five minutes. Halfway through the performance sound intervened the awkward silence changing the drawing techniques. The sound being from talks and lectures it had a thoughtful tone to it. On the right of the room lies a deconstructed version of ‘Set in stone?’; it lying on the side of its pedestal. Between this and the projected line of ‘Material Information’ hangs some experimental installation work examining the repetitive and everyday action of peeling an orange and the line this creates. 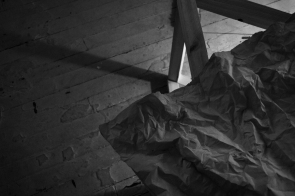 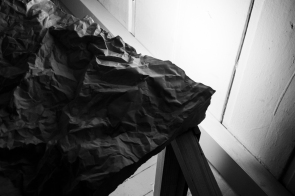 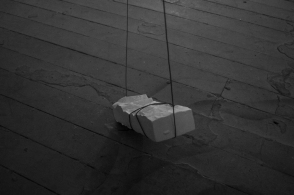